I went through a big Corkbark black pine phase, it has waned, but not before I generated enough material to write a book on them. Hmmmm…maybe one day.

This Hachi-Gen was one of about 8 cultivars I worked with. I bought it because it was cutting-grown. It came from Brent Walston’s Evergreen Gardenworks. Here is the description from his catalog:

Pinus thunbergii ‘Hachi Gen’ (Cork Bark Black Pine) We obtained this cultivar from Ken Sugimoto. As with many Nishiki cultivars, there is a problem with the naming. We are giving it the name supplied by Ken Sugimoto, but we have not been able to find it described in any text. It was reported to us that one Japanese company has it listed as ‘Hachi Gen Kyokko’, but it does not appear to be related to the well known cultivar ‘Kyokko’. It has needles shorter than ‘Kyokko’ and it does not cork as fast.

It is a cork bark type black pine (Nishiki Kuro Matsu) that forms corky ridges rather slowly, fully developing in about twenty years. Grafts and cuttings develop bark that begins to ‘crack’ at about three years. The needles have good green color and are quite similar to species needles, not overly long (about three inches full size). It has white buds and is vigorous growing, breaking new buds quite easily. These are cutting grown plants, so there is no graft and the corking will extend down to the surface roots. 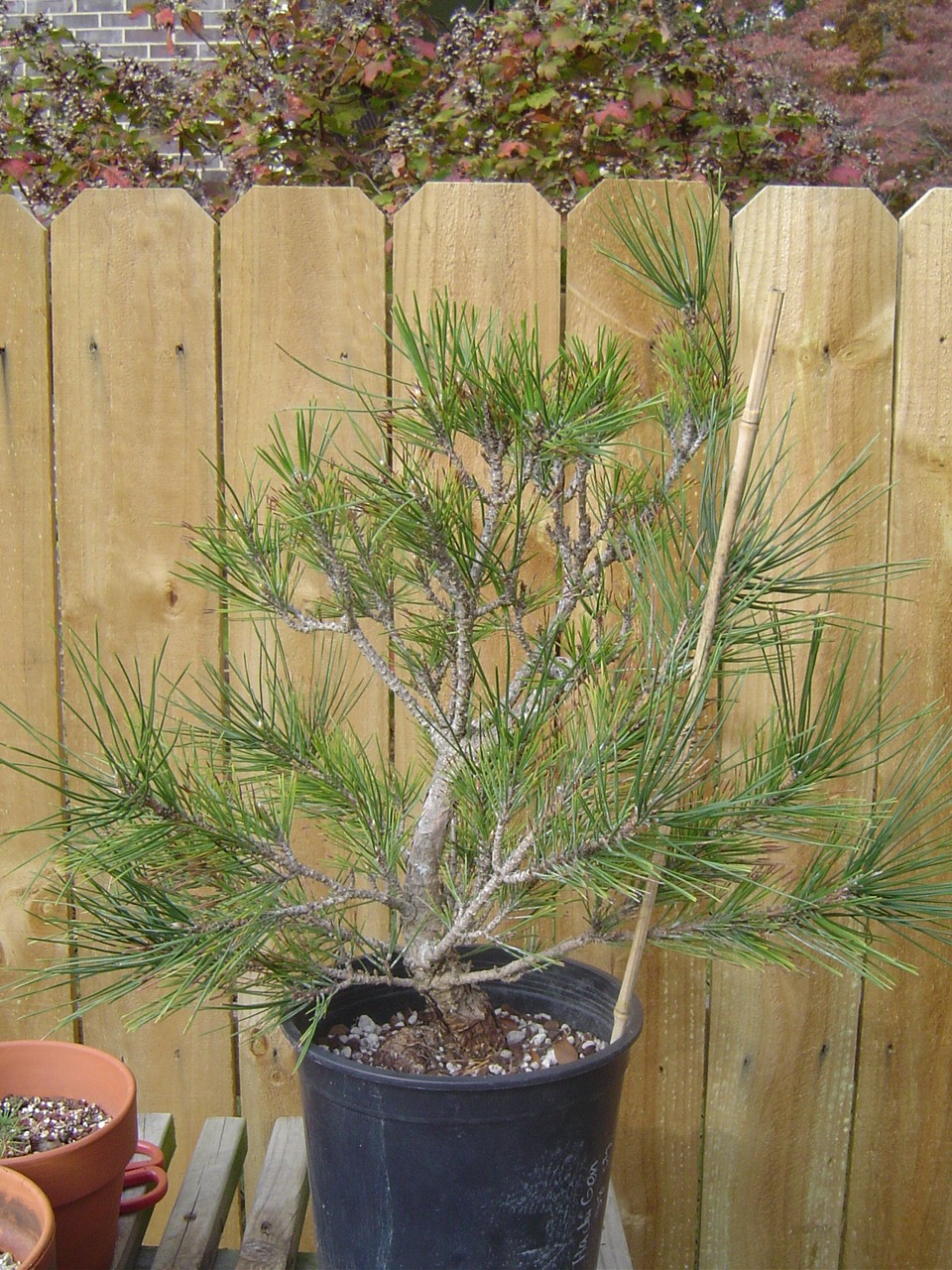 I was still trying to figure out a way to use all of the trunk, hoping the cork would make the straight section interesting. Really, the tree just needed to be compacted. Another half measure did compact the branching a bit. 2010:

Notice how the trunk was growing a little? Not much bark improvement yet.
2012, needle size is improving through annual summer candle cutting. 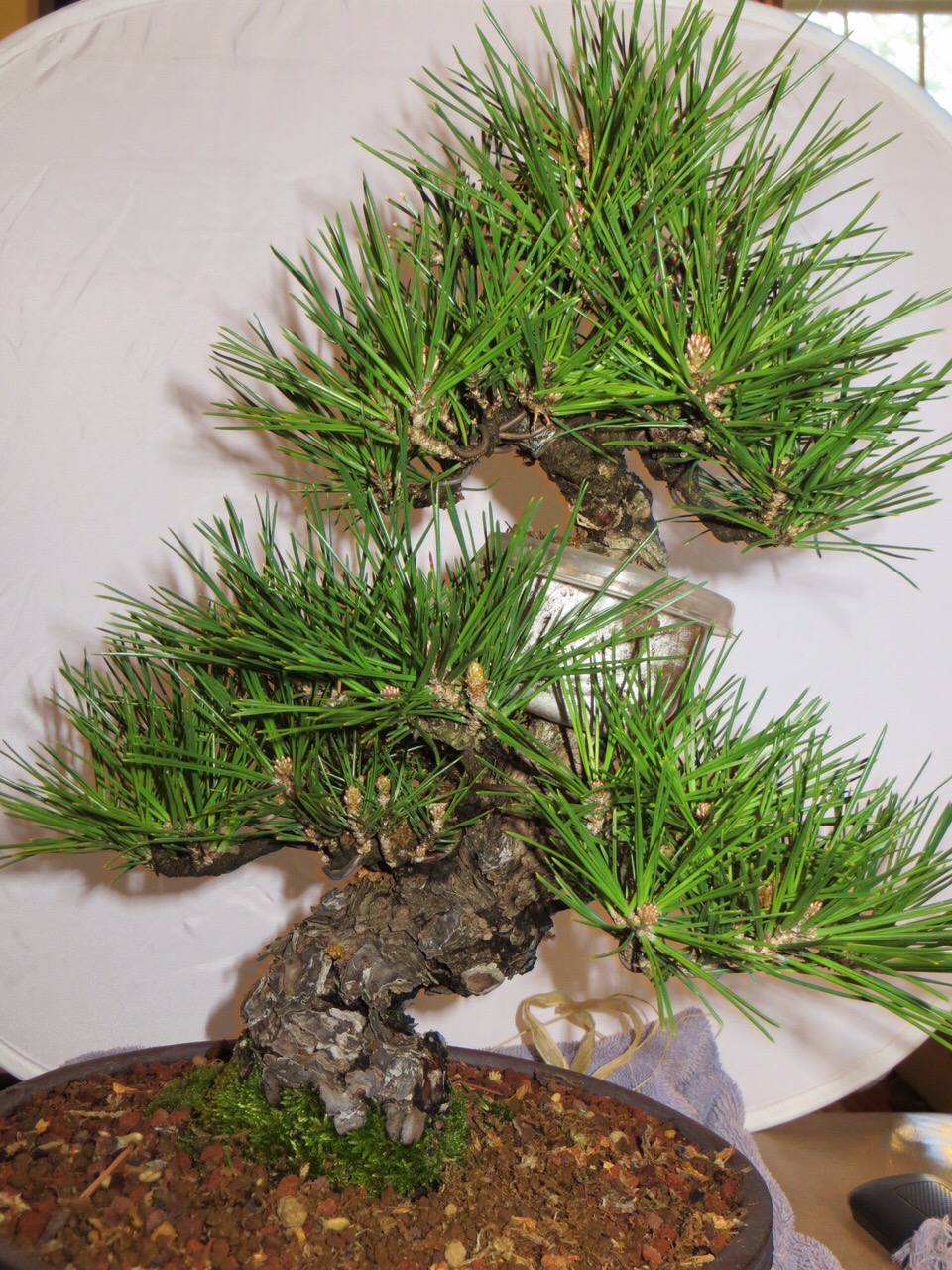 And in 2014 when the air layer failed; finally, a Mike Ehrmantraut full measure:

Then it took a turn and the needles became very yellow. I thought it was a nutrient deficiency, and added iron. Nope. Soil problem? It hadn’t been repotted in 6 years, but the roots were healthy, and the needles were still sharp.

I unpotted it and didn’t see any problems. And in 2015, it grew. Still yellow, but good turgor.

Odd; compared with a normal JBP:

Then I read Jonas’ article about root aphids…and gave it two malathion submersions at 2 week intervals. 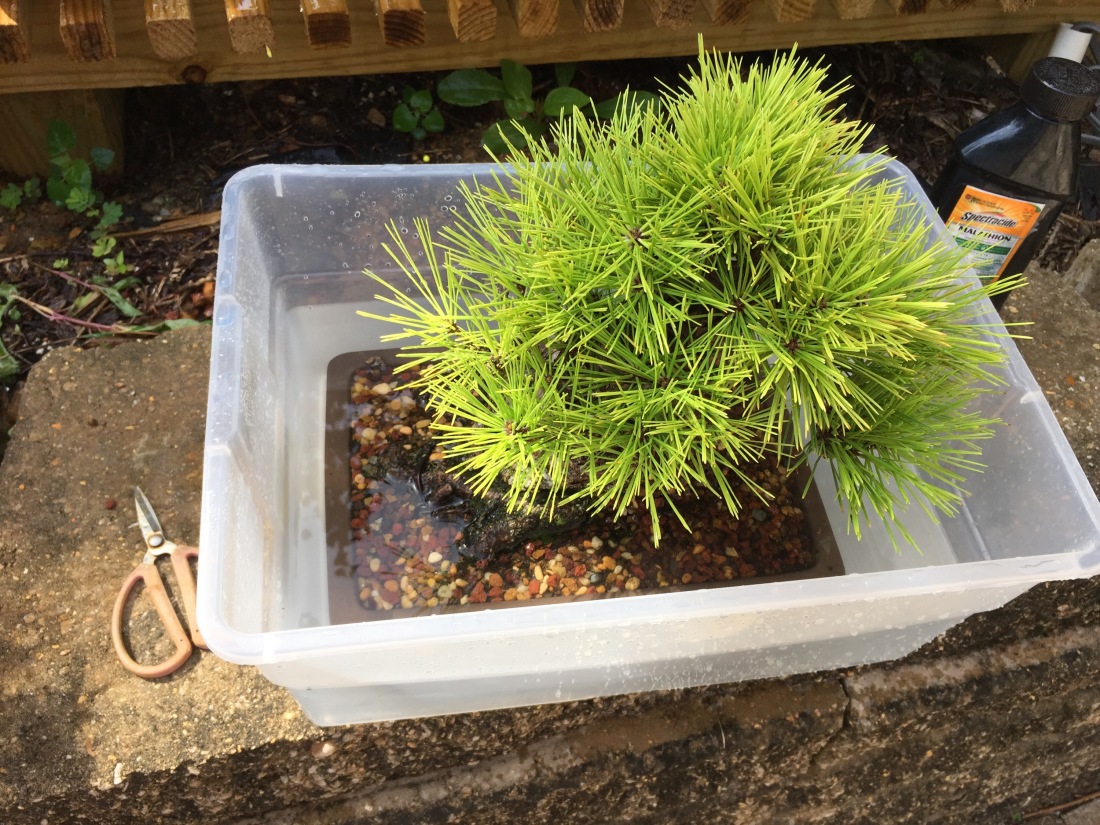 And a couple more after that. By mid-October, the color had improved greatly. Compared again to the healthy pine, and it looks like it’s back to normal! Good save! Thanks Jonas…saving trees coast to coast!

To the readers and followers of the blog, thank you for checking in on Saturdays and an occasional Thursday! I hope the posts here have, in some way, helped your collections, or at least your Saturday mornings!

Merry Christmas to all.