In early July, this tree’s primary branches were wired. Interestingly, since they were wired up and out, so each had a place in the sunshine, the tree responded with rapid growth. In about 3 weeks, it became necessary to remove the wires. 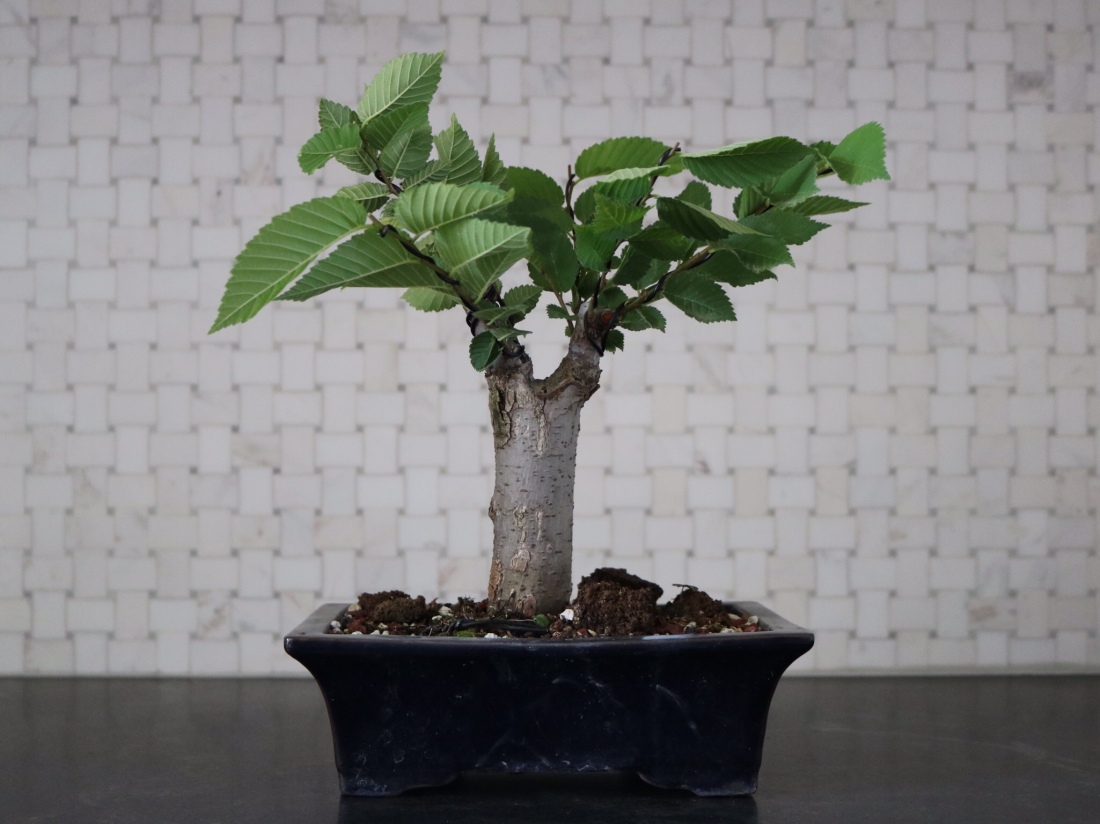 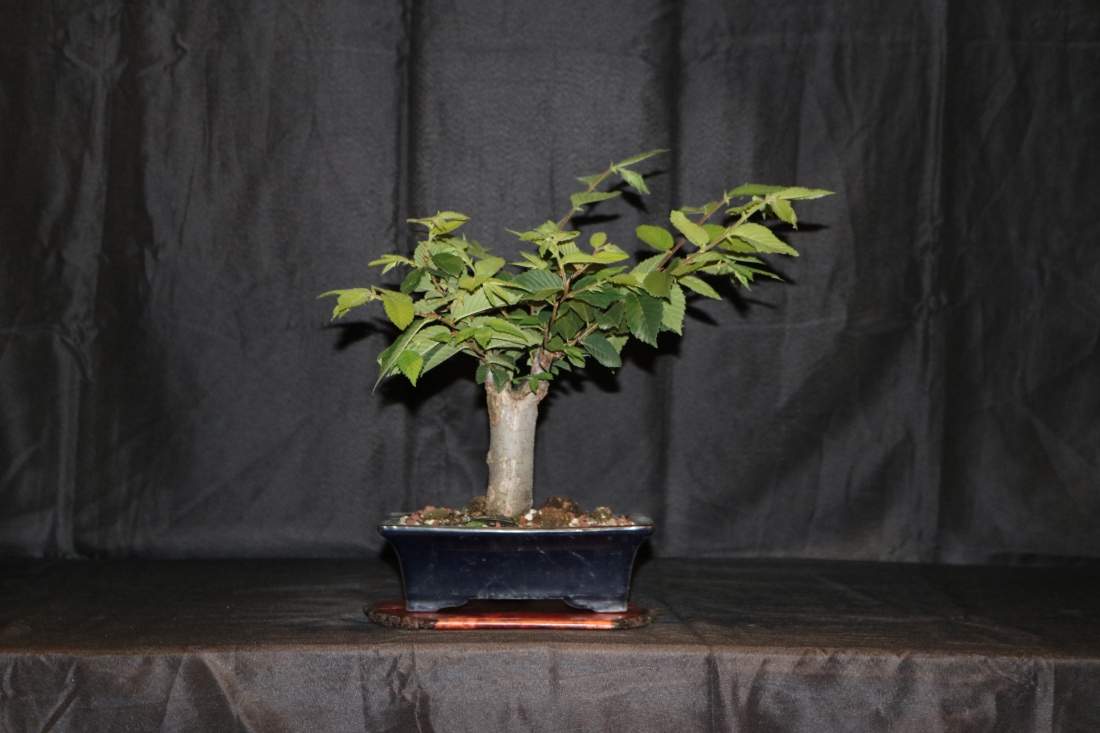 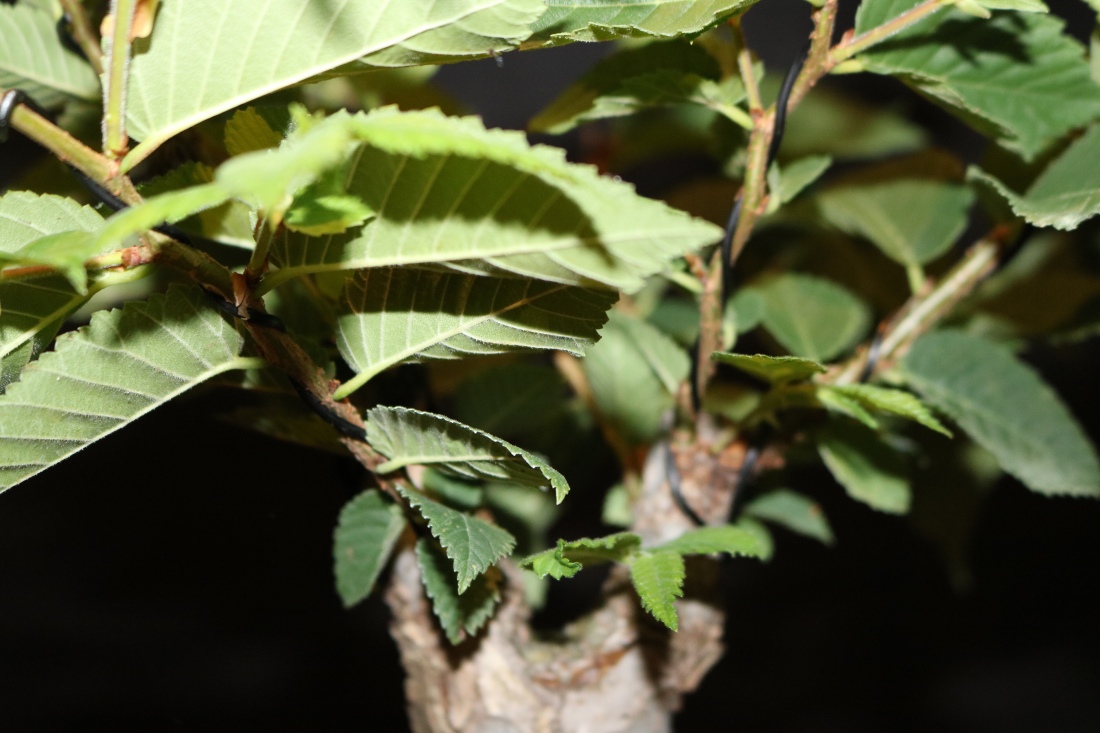 Wires removed, and the primary branches were shortened…significantly: 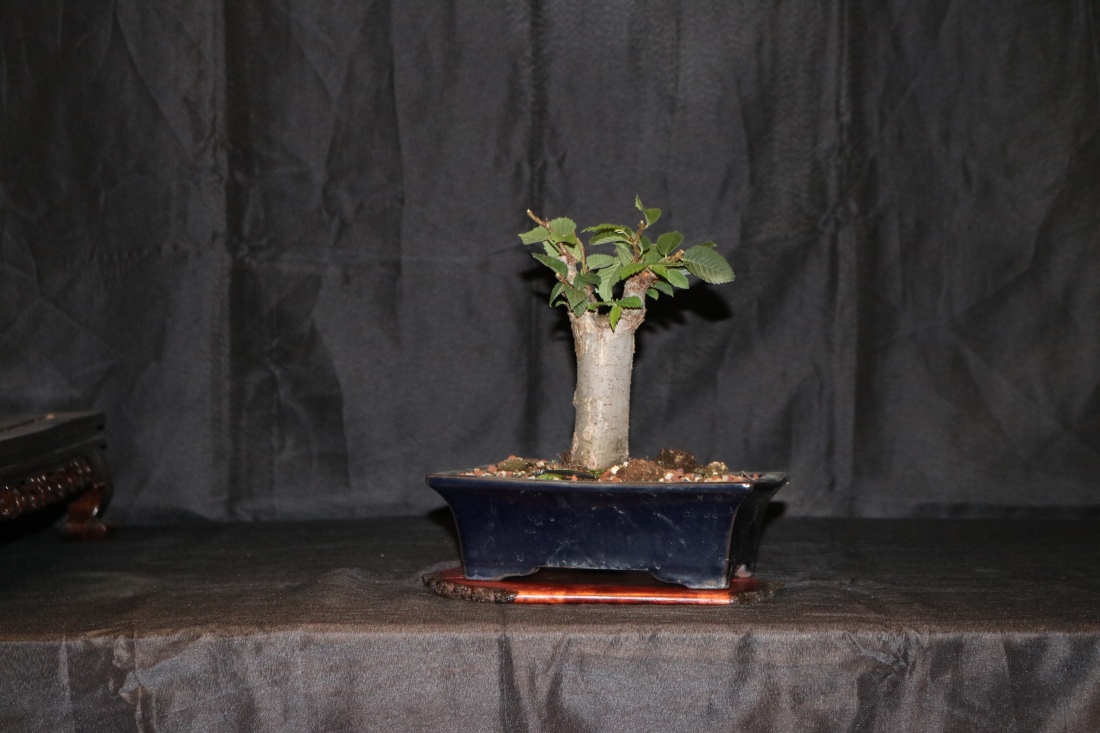 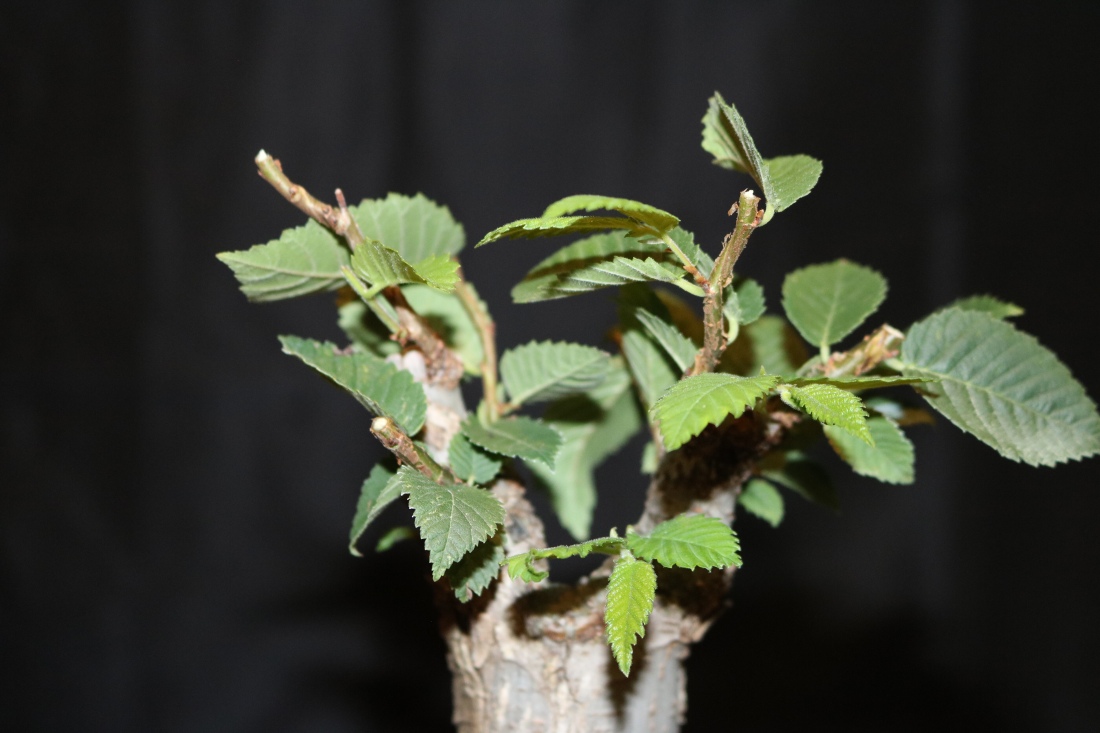 This post covers work done over the course of several years; a direction I have been trying to take this blog over time, and will continue to do. It may mean fewer posts, but showing the cause-effect of our employed techniques over a long period of time is a very effective way to demonstrate and learn.

This is the last piece of a zelkova remaining from an old bonsai I received from a friend almost 15 years ago, and have since sold, but not before making several layers from it.  This one happens to be rather flawed in several ways.  First, the roots were very uneven, a portion of the trunk was dead, it only had 2 main branches emerging from the trunk chop…and worst of all, the trunk was too tall to be shohin.  Here is the original parent tree, and the layer from a cutting which is the subject of today’s post. 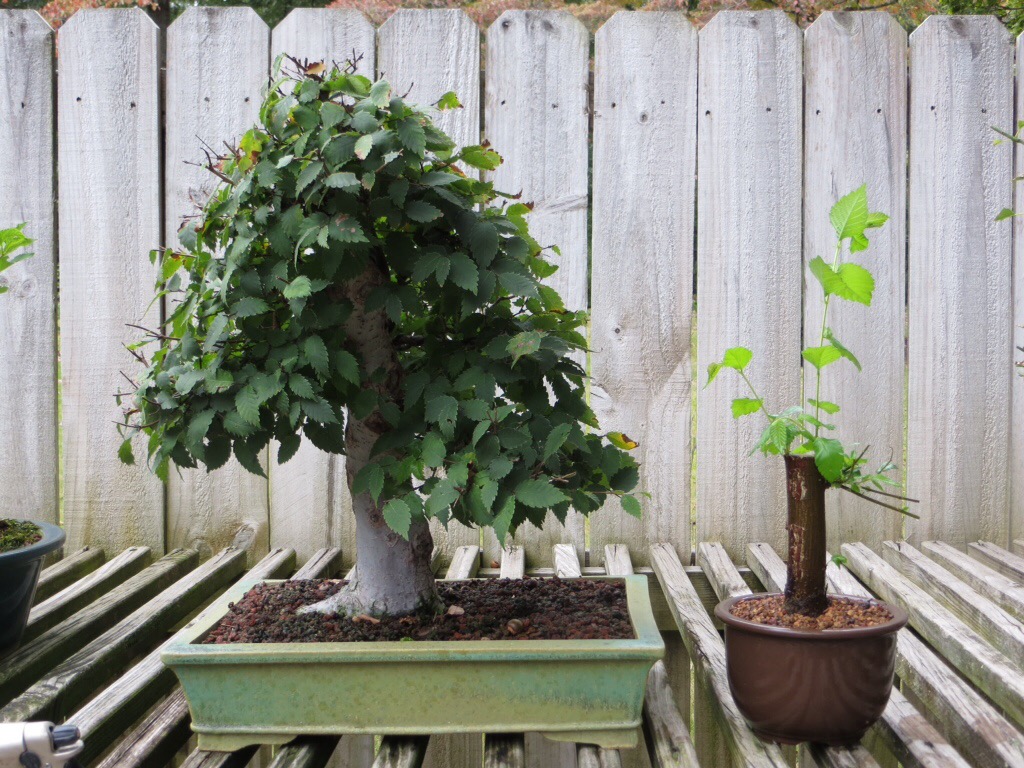 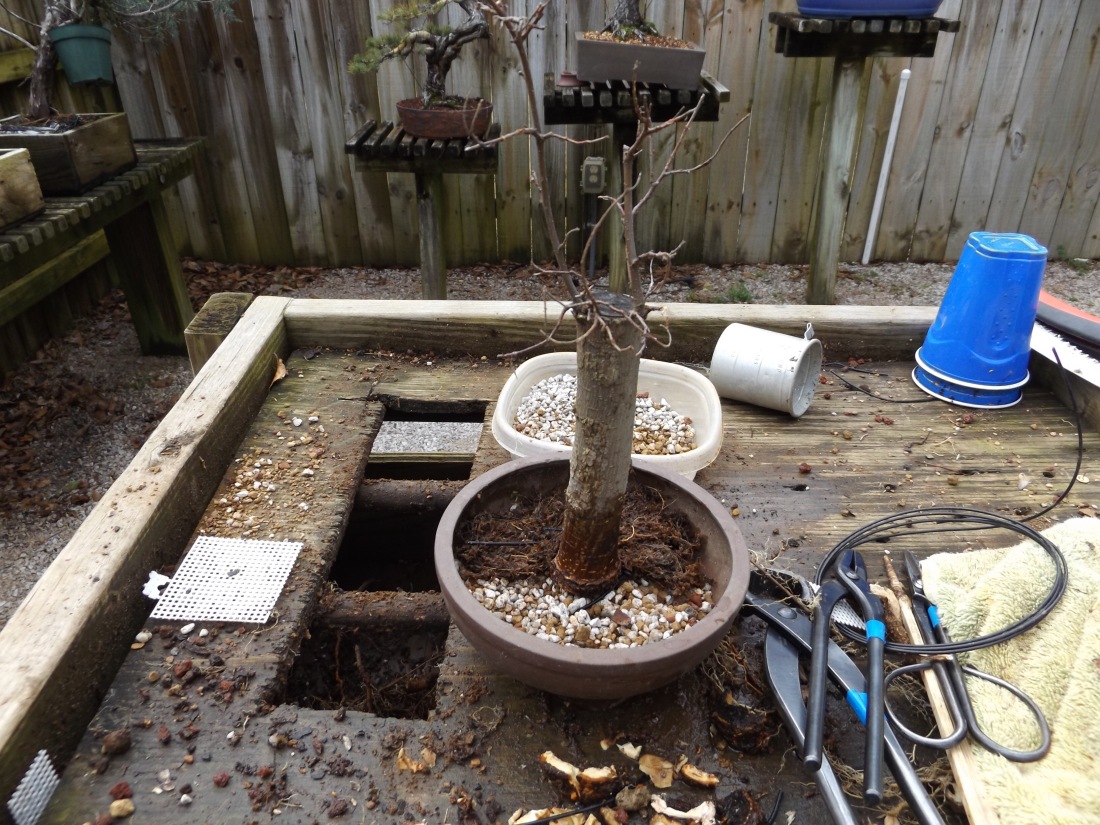 Shohin bonsai may be 8″ tall from the soil line to the top of the tree.  Currently, the trunk of this zelkova is 6″ tall to the chop, which would only leave 2″ for the canopy.  It would make for a very unusual bonsai.  Since the roots are bad, a good solution would be to air-layer it again, and work to establish a better, radial root system a bit higher up on the trunk; shortening the trunk, and allowing more room to develop a canopy within the 8″ height limit.

Problem is, I know part of the trunk is dead, and I wanted to make the layer around a perimeter of all-living trunk.  Can you spot any dead portions? 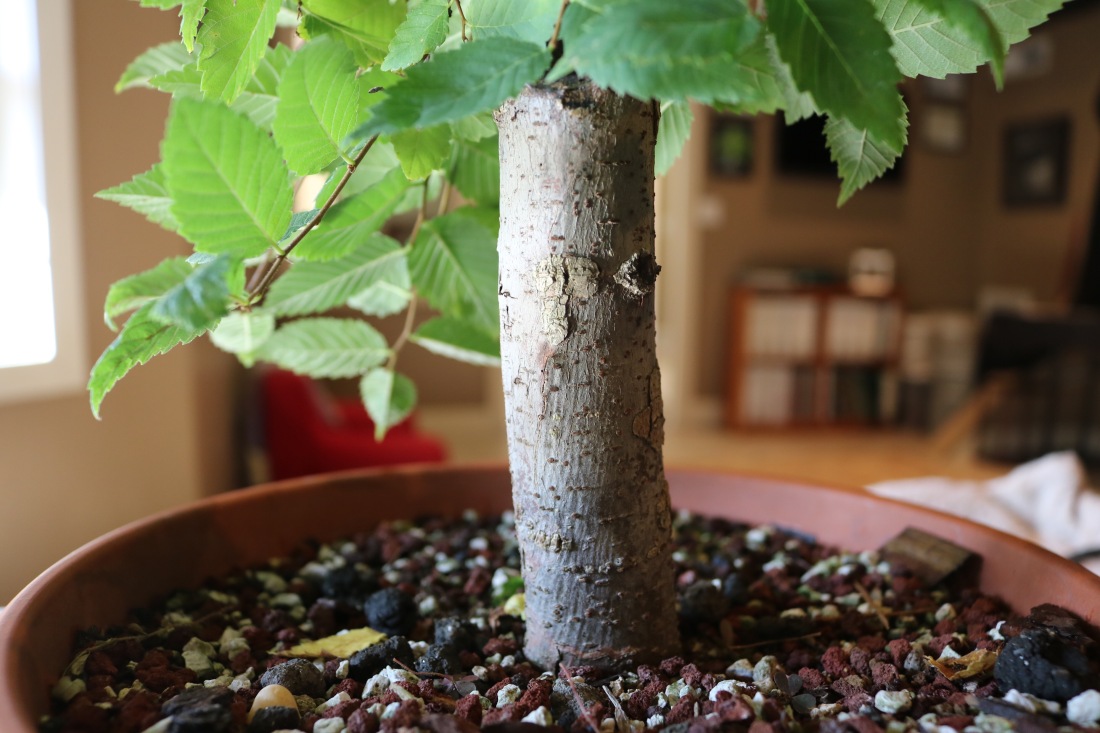 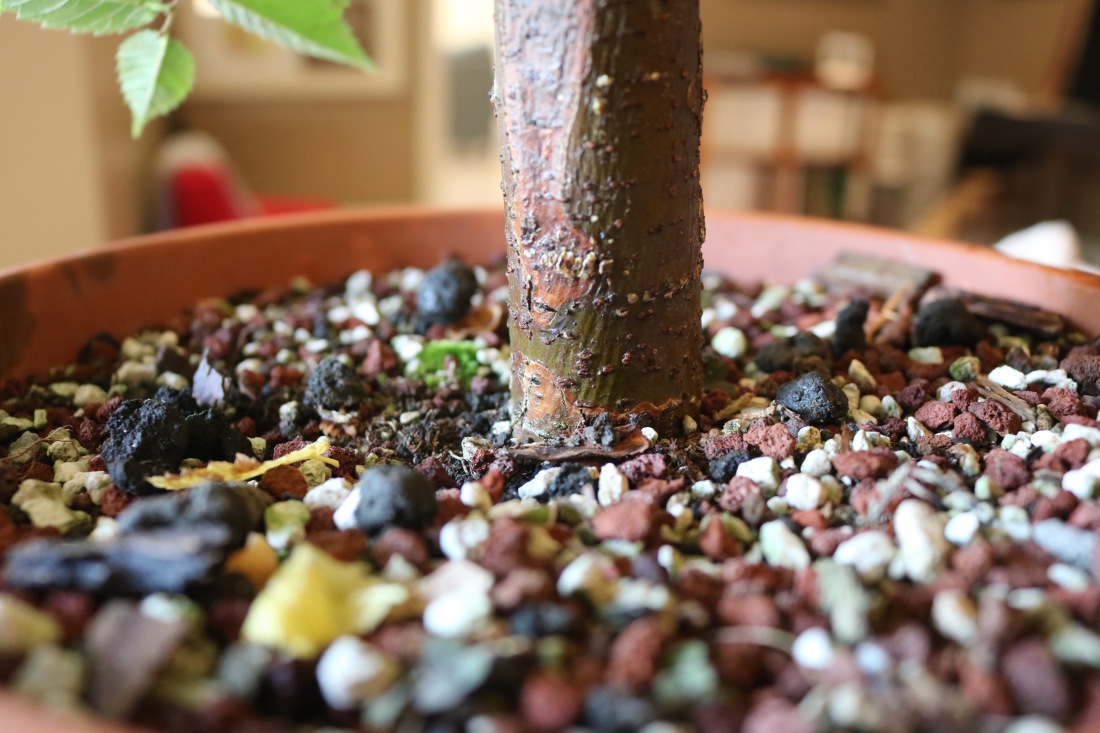 So here is the cross-section I can use and hope for a full-radial nebari.  Worst case, this is the current back:

Using a sharp grafting knife, I cut away a ring of bark, cambium, and xylem: 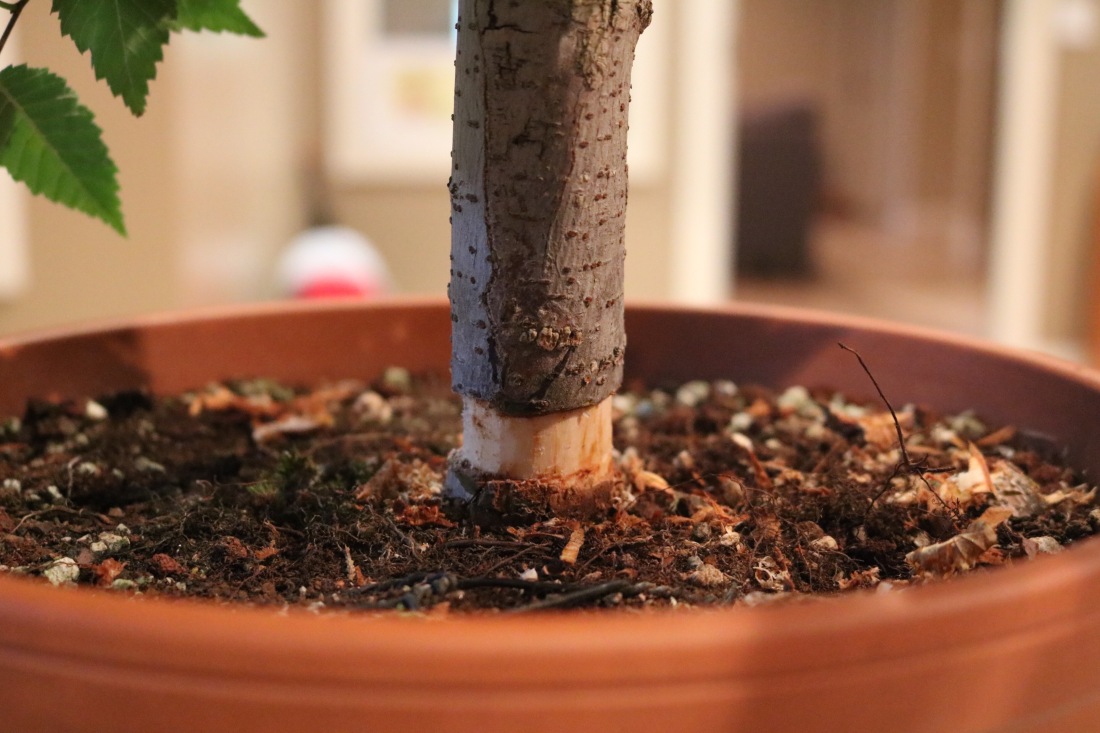 Added a thick piece of aluminum wire to encourage roots to grow out instead of straight down: 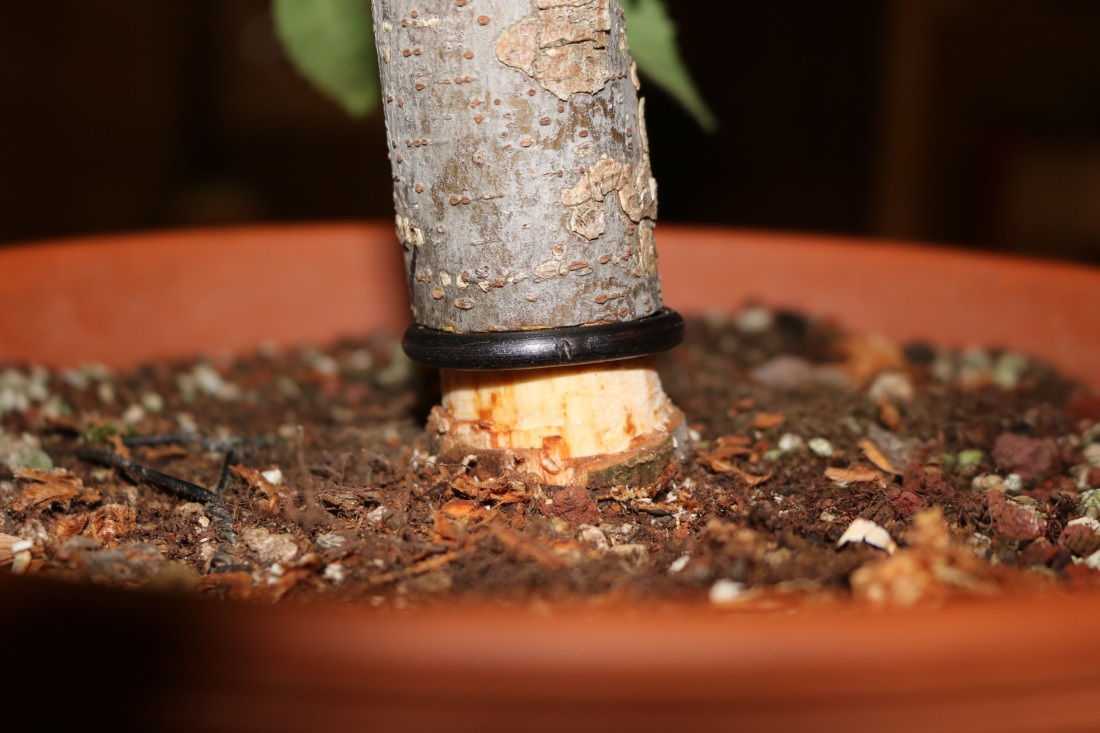 Then affixed a new container around the layer:

The container will be filled with chopped sphagnum moss, soaked in a 10x diluted solution of Dip N Grow, and some fine akadama:

The work for now is finished. 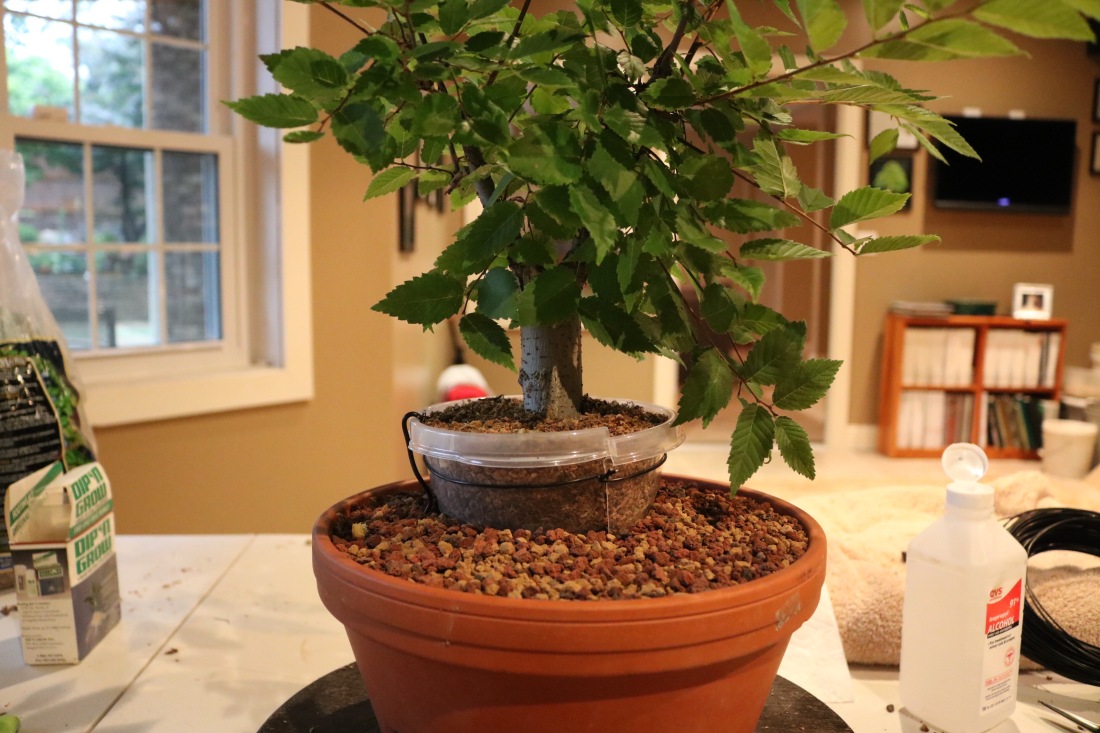 And now we wait for roots.  2 months actually…and here it is in mid-August: 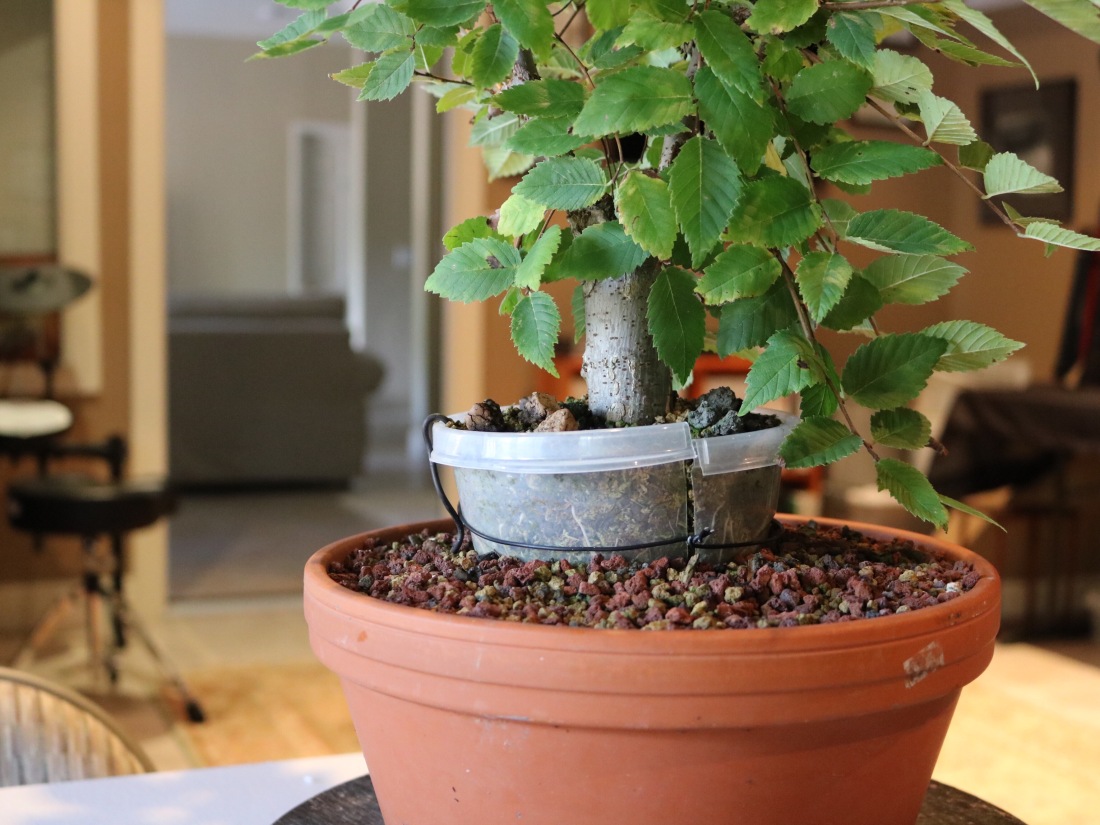 And so far, roots are appearing all the way around the container.  So are the Biogold fertilizer cakes! 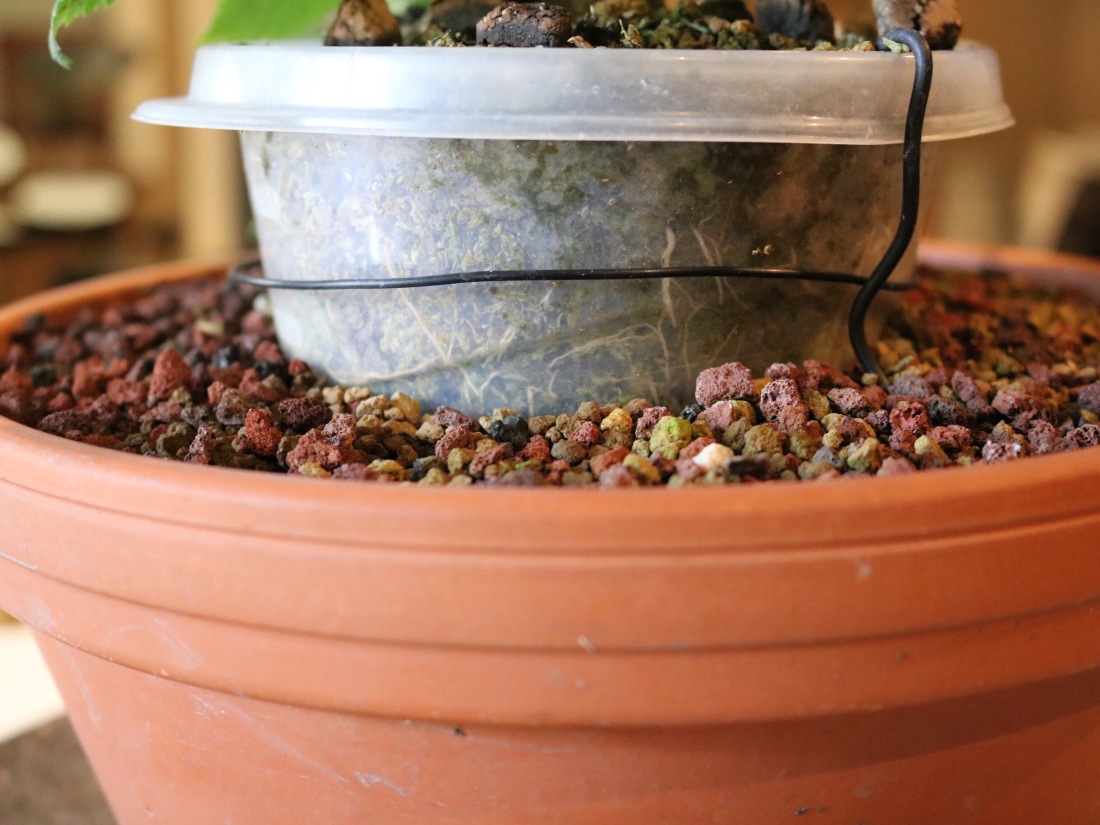 That’s a good sign, but doesn’t mean a radial root system just yet.

It’s growing well up top too, so in another month or so, we can talk separation.

In Mid-September 2017, I decided to make the separation.  It is always nerve-racking, and my concern is that roots found their way up into the container, instead of out from the top of the cut.

First step, cut it back hard to take some of the demand from the newly-formed root system, but leaving some green to keep it moving: 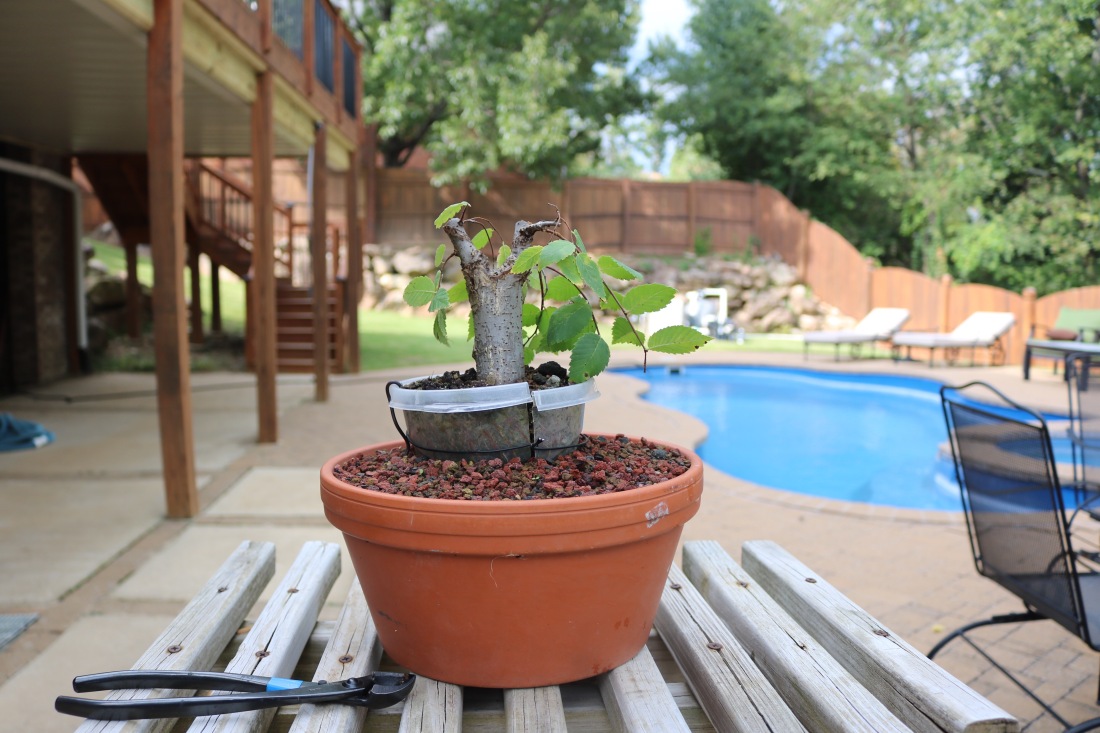 Then unpot to make it easier to find the seaparation between the original soil level and the new root system: 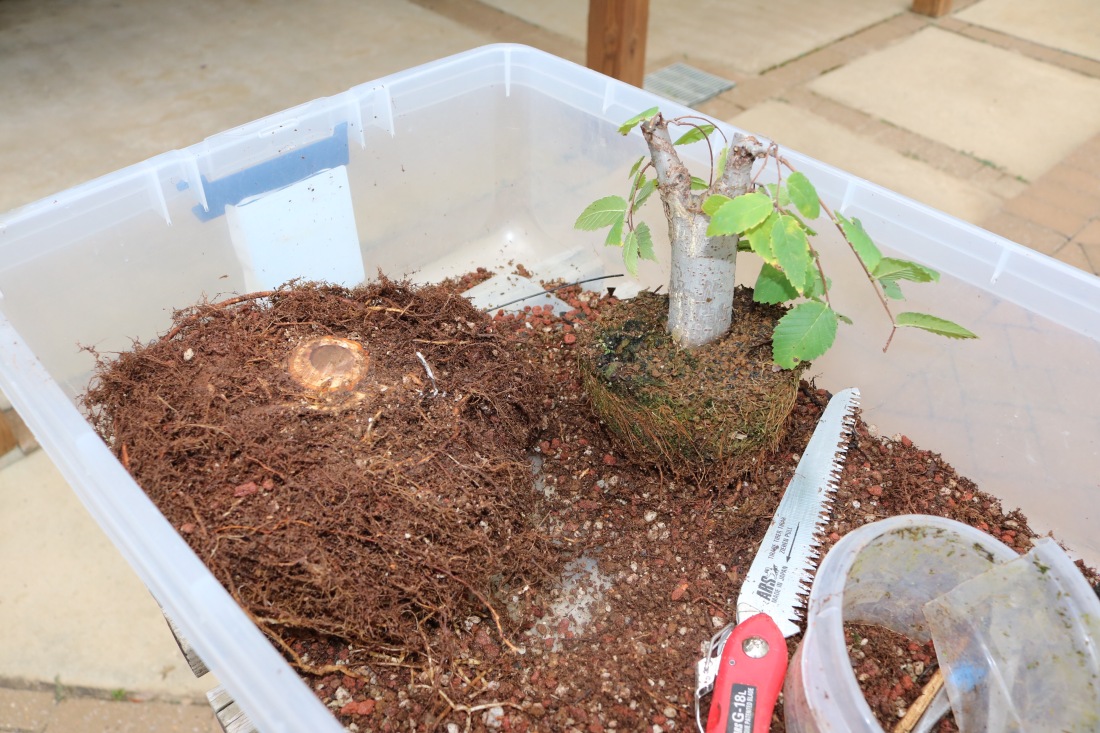 Carefully, find the original wire tourniquet and nibble away at the base to get a little closer: 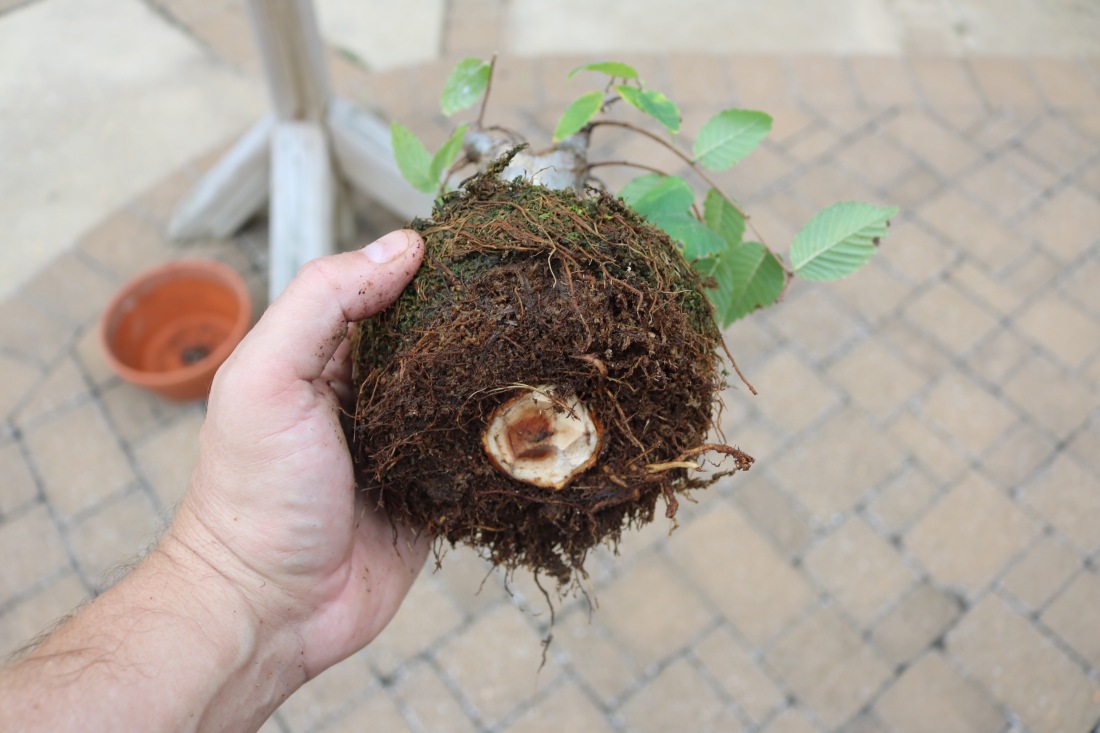 Finally, I set the intact rootball into a pot:

And packed some soil into the voids:

If it survives, in the spring I can bare-root and sort out the roots for the all-important radial nebari.  Here is a shot from the end of October.  The green leaves are encouraging that the tree is still alive.

Fast forward 8 months to May 2018 and it’s alive, but barely. I decided to delay the repotting and let the tree just grow this year. Next spring, the root work can begin. 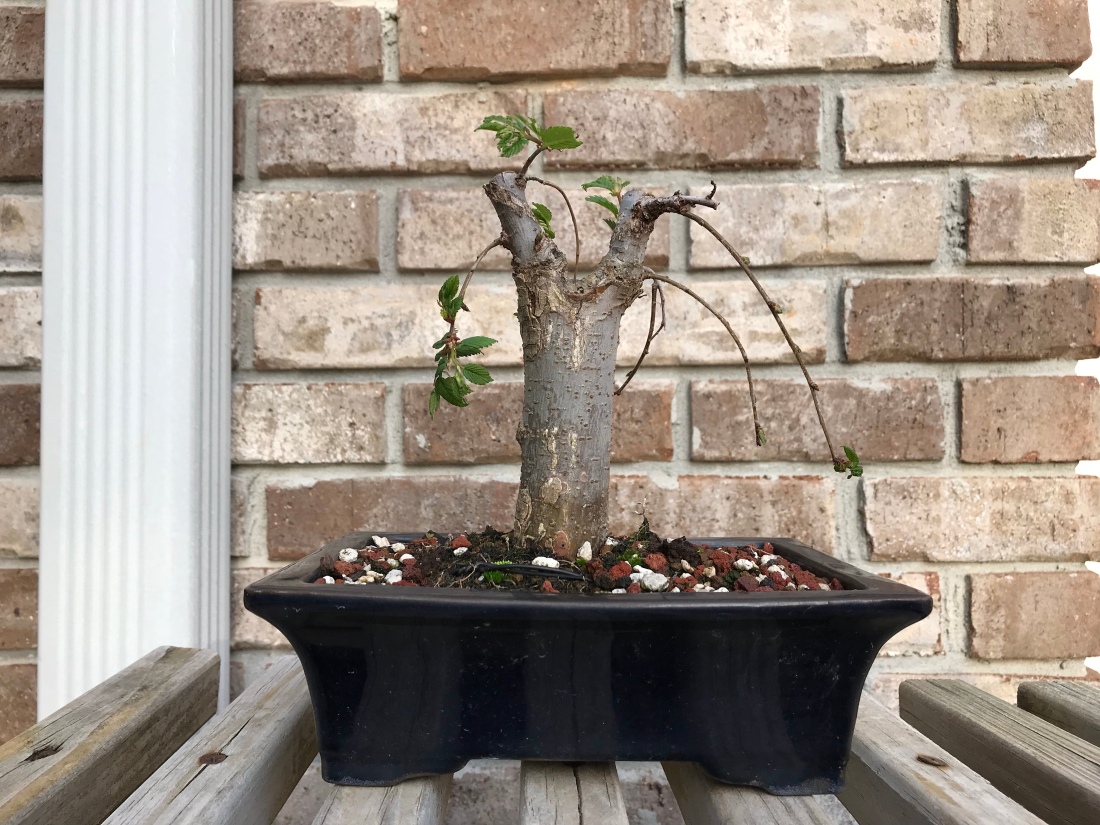 Clearly in this case, the front is defined by the back. After it had a few months to grow, in July 2018, I was also able to define some primary branches on the tree. 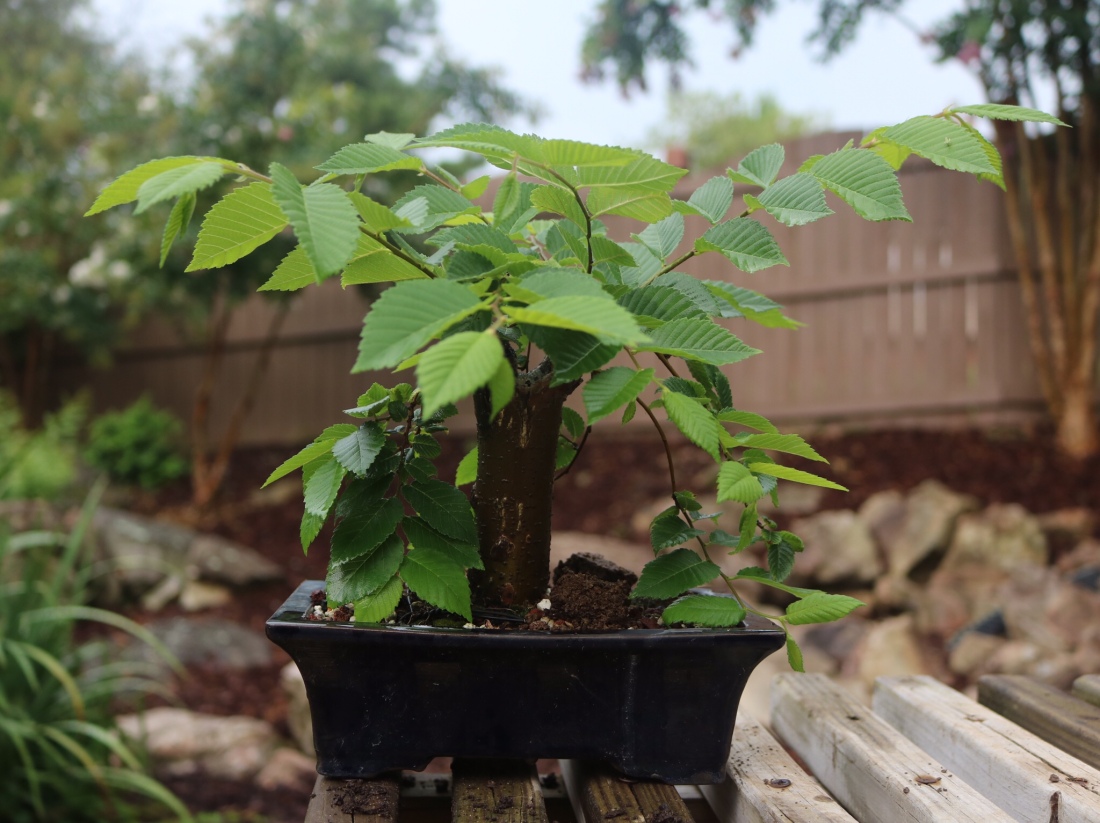 And add a little wire to keep them pointed straight out…

Not bad for a year’s work. Next spring we’ll tackle the roots. 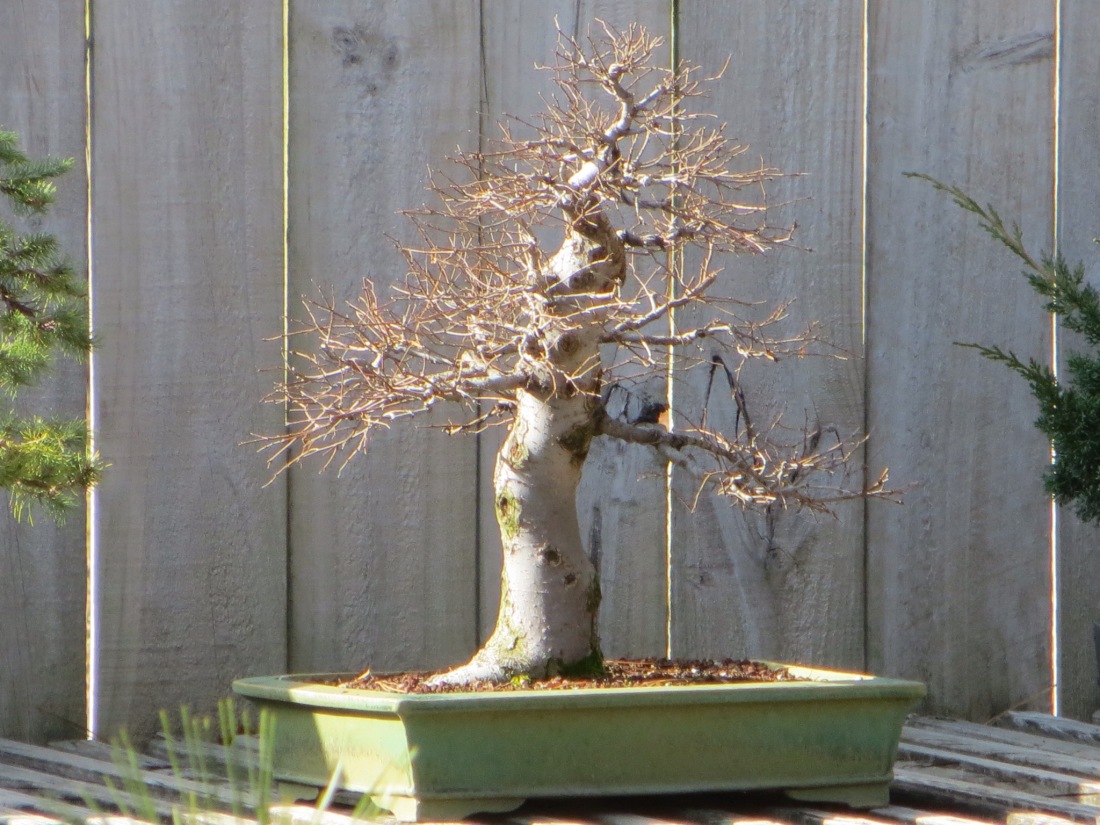