I’ll start with a couple caveats: I’m not the pots expert…studying, yes, but no hopes to be the savant who proofed this post before it landed; thanks again Ryan Bell, for your expertise and continued research. This is an aggregation of what I’ve found out there, because I like Koyo pots.

I believe Koyo pots will become more collectible as his production wanes, although he has been a prolific potter, so the scarcity isn’t the same as Tofukuji’s work.

“Born Aiba Kouichirou, July 26, 1944
He opened his kiln, known as ‘the garden pottery Kouyou’ in 1970. Thereafter, in 1972 he won an award in the technical section and design during the first organization in the prize * Chouza. He also won in 1981, the prize of encouragement during the first design competition.

He shows his work focuses not only around the bonsai pots, but on pottery in general. It mainly creates for small bonsai pots and bowls. It is also recognized for its specific enameling. Recently, he built a furnace, as formerly, jointly uses wood fuel. It seeks to improve the pottery kilns using clay ‘shudei and Udei.’ His dream is to participate in exhibitions and Suiseki Suiban in old German castles.”

Lindsey Farr tours the kiln in this episode, starting at 7:40 in:

One of the more popular glazes (and the one that drew me in) is his oribe; which was of Chinese origin, posthumously made famous by Tofukuji, continued by Ino Syukuho, Ikko, Aiba Koyo.
Glazed Pots by Ino Shukuho
Check out the oribe lineage: 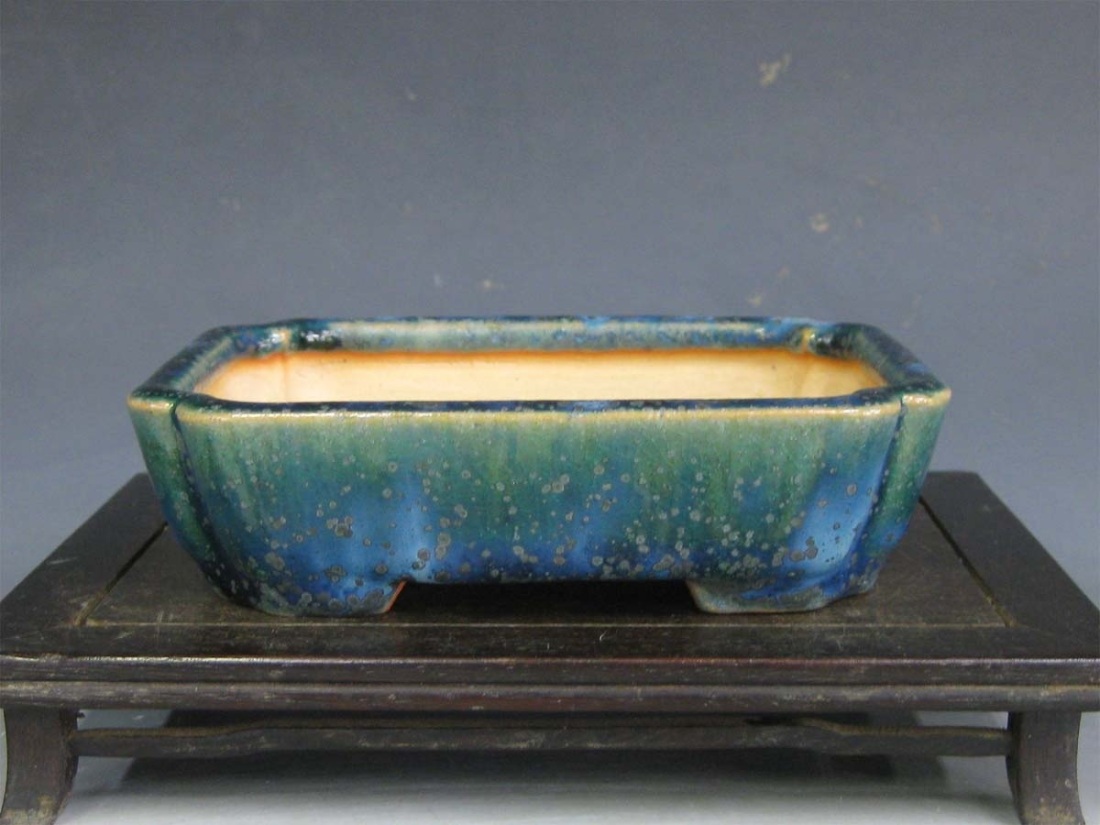 From Dave Rochester: “Oribe refers to a green glaze that contains copper. It’s origin is also in Japan’s Mino Province, and was associated with Futura Oribe (1544-1615), a leading tea master and warrior of his time.
This glaze will turn red/pink if starved for air in the firing (called reduction). Imagine opening the kiln and expecting green and you have a bunch of red…that must have been cool.”
Indeed… 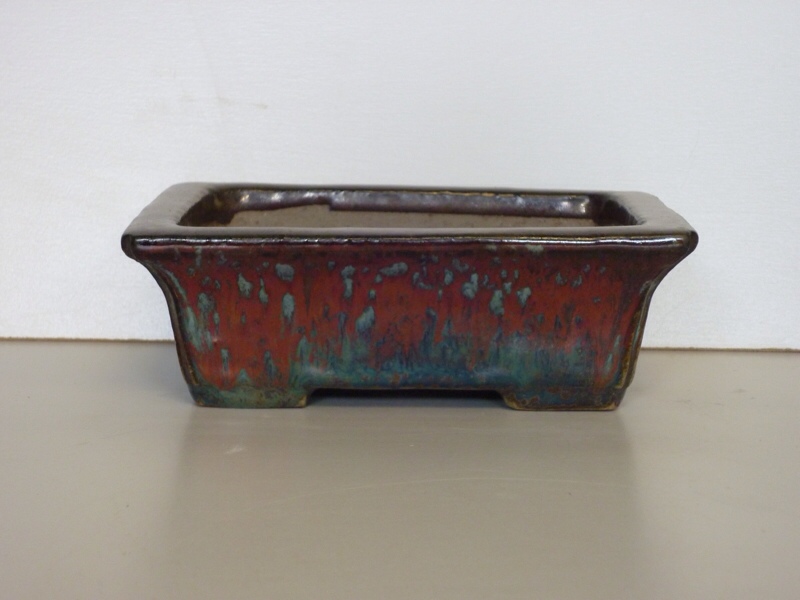 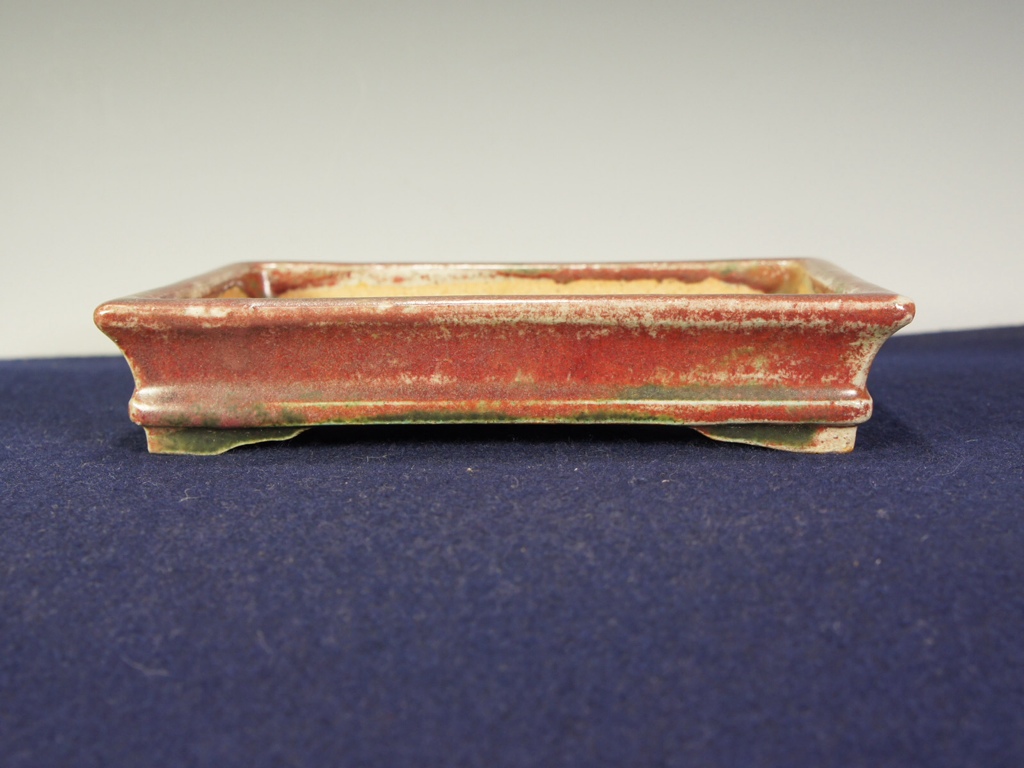 A few others I’ve added:
Production-grade: 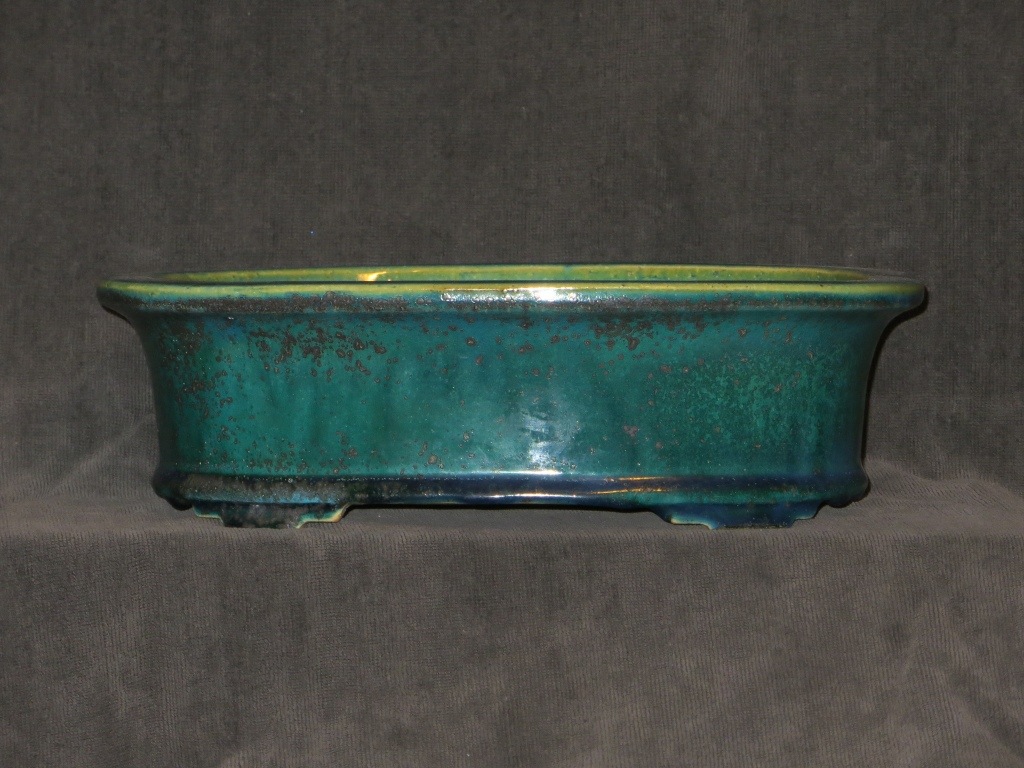 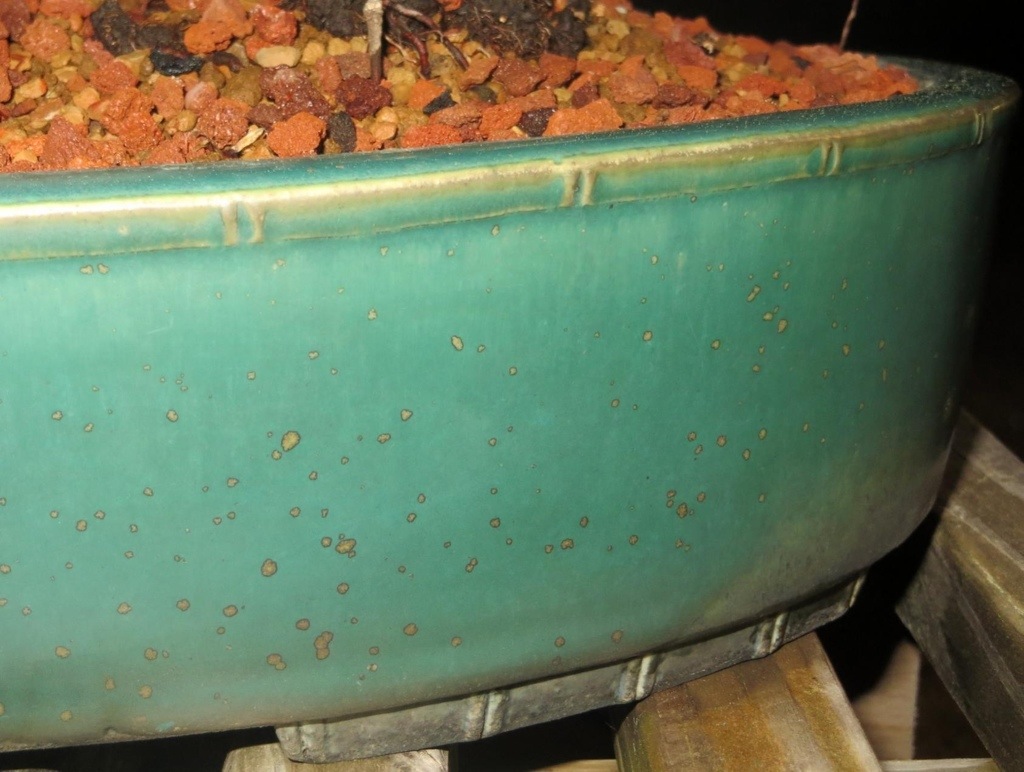 This one is stamped and signed, and also includes a Fuyo-en chop; a famous deciduous nursery that commissioned pots by Koyo and Ino: 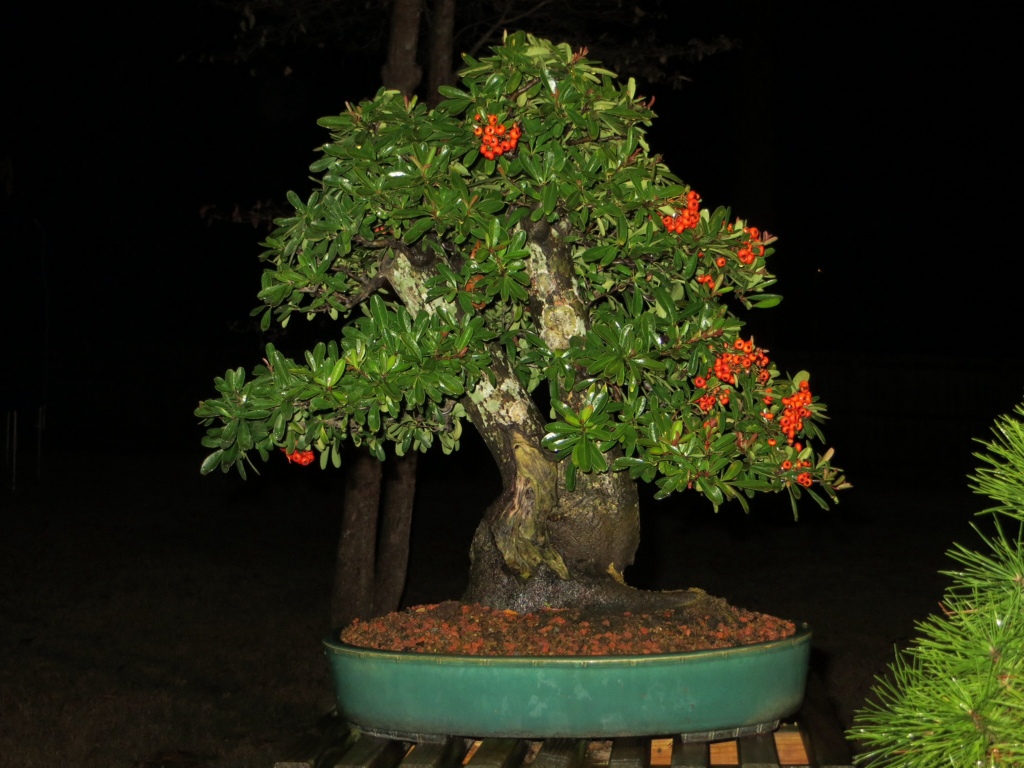 A few shots at Fuyo-en are at these sites. You’ll see plenty of great trees in great pots there:
Fuyo-en
http://markhobson.net/omiyakoenbonsai/content/IMG_9849_large.html 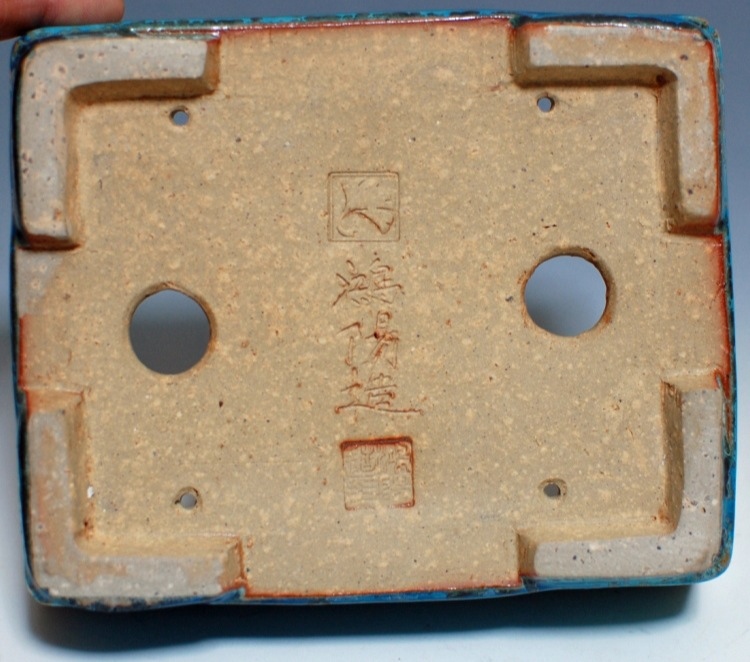 A funky purple and blue motif: 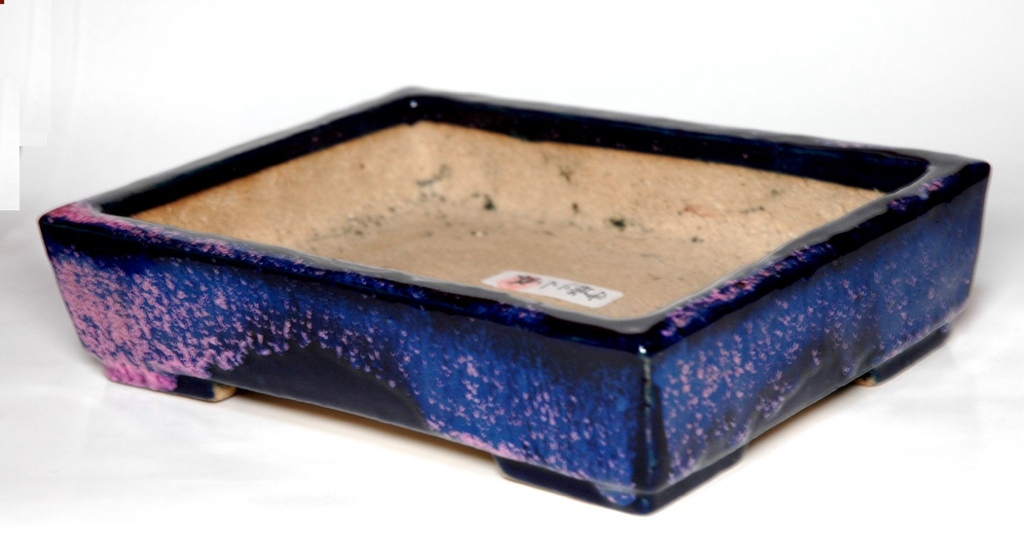 And don’t forget the yellows… 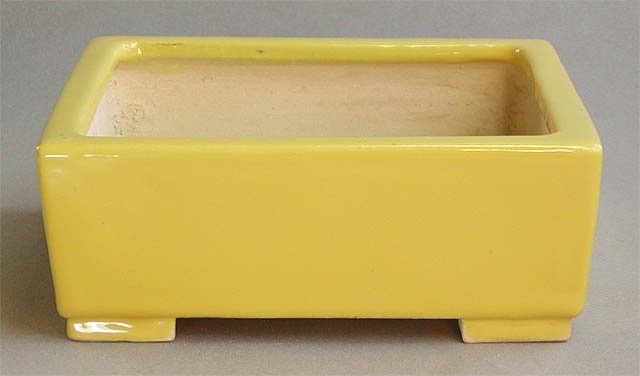 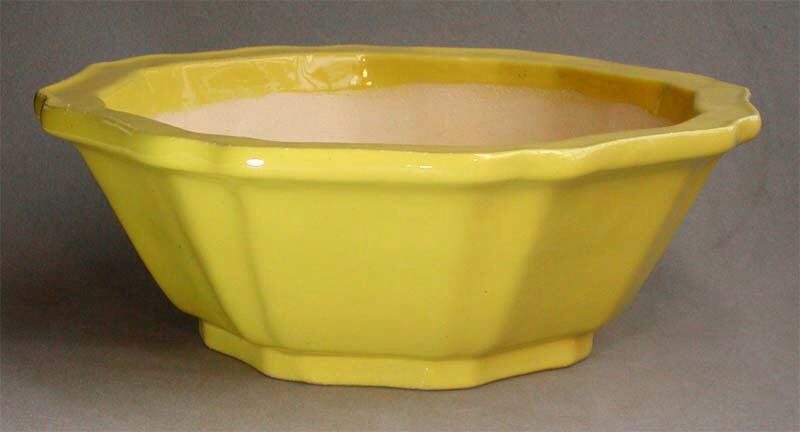 Thanks for indulging…next week, back to the trees, junipers to be specific.